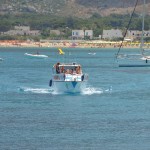 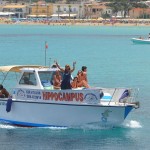 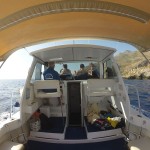 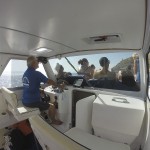 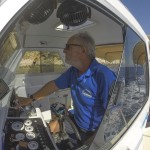 Year of production: this “fast cabin cruiser” (as it is rightly called in the brochure from the period) was first made in 1972 and was probably produced until 1984. In just the first year alone fifty boats were produced, mostly for the Police and other Public Corporations.

In 1972 the shipyard moved along the banks of the River Magra, to Ameglia, and the Crestliner company became Crestitalia. Making the most of their know-how about fibre-glass technology, a field in which Crestitalia was particularly expert, the company’s range of craft included self-righting lifeboats, fast patrol boats, pontoons, water taxis, and motoryachts.

In short, a wide range of fibre-glass vessels designed to be safe and seaworthy as required by the police forces.

Presentation: there were already various cabin cruisers on the market at the time, but the name of Crestitalia came to mean well-built, solid boats as is only right in boats that were created to be seriously seaworthy, and not just for show.

Construction: in fibre-glass from a single mould, with structural reinforcements in accordance with RINA regulations.

Description: the hull is suited to both fast cruising and to the lower displacement speeds thanks to the decidedly seaworthy characteristic of this cabin cruiser. The hull shape is pleasing and the boat has a natural linear look.

Sailing: the Aztec is stable, the bow does not slam on the waves, it has a turning area of about 30 metres, and excellent stability. Try saying that about many of the boats built today…

How much of this is still valid for today’s market: all of it, particularly the hull.

Extract from the magazine Nautica